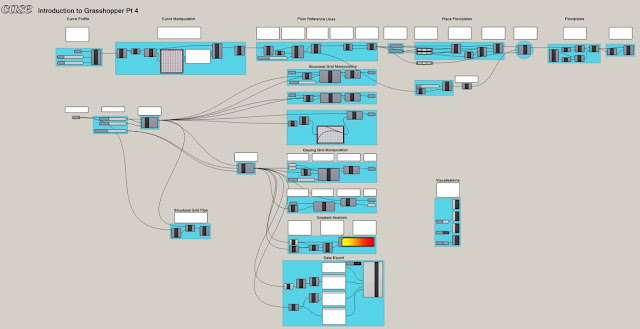 Computational Design is the new black in the architectural design world. From powerful automation scripts to iterative design algorithms, computation has given designers the ability to create novel processes to support innovative architecture.

The program that has dominated the computational design conversation in recent years is none other than... Grasshopper!

While Rhino enables designers to freely explore design concepts through a conventional 3D modeling interface, Grasshopper allows the user to create customized tools using a graphical algorithm editor.  Uses of Grasshopper range from production automation, geometric rationalization, or iterative design exploration.  In the past, these processes typically required the user to have a knowledge of programming or scripting.  In Grasshopper, these processes are achieved by wiring together nodes into a visual graph representing the framework of an algorithm.

Like with CASE's Rhino 101 training, our approach to teaching Grasshopper focuses on useful implementations to support design exploration and development  in architectural practice.  As with our Rhino training, we have chosen to focus Grasshopper training around developing a parametric version of the Swiss Re Tower by Foster & Partners.  The tower is well suited for exercises involving rapid iteration and algorithmic frameworks.  For designers who also take our Rhino 101, the Grasshopper course allows us to contrast different methods of working to achieve similar geometric results.

The Grasshopper workshop begins with an exploration of the graphical user interface, component library, and basic examples of data management and workflow.  We then immediately apply these concepts to how to derive the geometric form of the tower.

After defining the tower form, we then proceed to develop some of the architectural elements and extract some data.  For example, we will create a parametric system for slicing floors from the tower mass and report area calculations.

After the massing and the floors have been defined, we then explore the exterior facade.  Designers will set up definitions for defining the structural diagrid system and the exterior curtain wall.  Different generative concepts will be explored for developing patterns and modules using popular plug-ins.
Finally, workshop participants explore workflows for data extraction.  For example, designers will output data to Excel including floor and facade information.