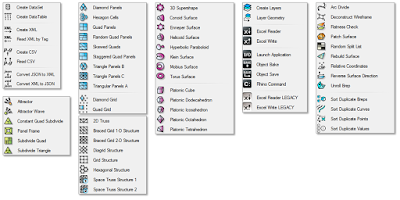 I am pleased to announced that a new version of LunchBox for Grasshopper has been released as a free download in the new ProvingGround.io website. It has been over a year since the last update and there are many new components and improvements in this new release. Features of interest include….


Download LunchBox at the new ProvingGround.io site!
Posted by Unknown at Thursday, July 09, 2015